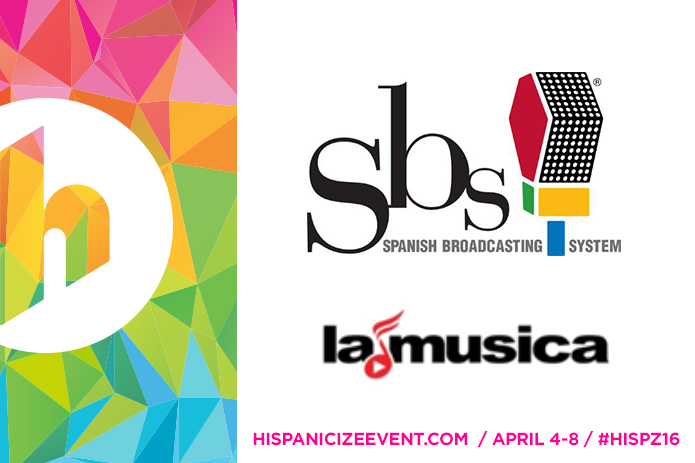 Hispanicize Media Group announced yesterday that it has signed a major music and entertainment alliance with Spanish Broadcasting Systems (SBS) (Nasdaq: SBSA) and its digital streaming and entertainment service LaMusica, that will commence at this year’s Hispanicize 2016 event (www.HispanicizeEvent.com). Presented by Prudential Financial, Hispanicize 2016, the largest annual showcase of Latino trendsetters and newsmakers in the nation, will take place in Miami April 4-8, 2016.

Spanish Broadcasting System’s LaMusica, launched in December 2015, redefines mobile radio with an immersive visual experience unlike any other streaming app available in the market today. Users can live stream all of SBS’ radio stations and create their own unique radio experience with seamless access to a collection of over 23 million songs. LaMusica also offers hundreds of expertly curated playlists, including those created by today’s most popular DJ’s. Users will have the ability to create individual radio stations based on their favorite artists, songs or genres. Additionally, they will be able to further personalize their radio experience with “My Radio” a feature, developed exclusively by LaMusica’s product team. The free app is now available for download for iPhones via the iTunes App store and for Android via the Google Play store. Users will be able to enjoy LaMusica with either an English or Spanish-language interface.

“This is a game-changing partnership that will have a dramatic and immediate impact on our music festival and the overall music trajectory of the event,” said Manny Ruiz, founder and CEO of Hispanicize Media Group. “Working with SBS and LaMusica, a Latino-owned powerhouse that for decades has literally impacted our cultural tastes and sounds, is a huge win for our sponsors as well as for the many Latino and multicultural indie artists and music lovers that we champion.”

“We are very excited about this fantastic synergistic partnership with Hispanicize. LaMusica and Hispanicize share my things in commons, including authentically connecting with and servicing our audience”. Jesus Lara, Executive Vice President, Digital Media Strategy Spanish Broadcasting Systems. “LaMusica is honored to be part of this influential event and proud to present our immersive digital music experience for Latinos, by Latinos.”

Key app features on LaMusica include:

— Personalized radio experience: Users can create their own algorithmic playlists based on artist, song or genre preferences. LaMusica takes radio personalization further via the “My Radio / Mi Radio” feature.

— Share with Friends – Share your favorite stations or playlists with your friends across major social media networks.

The final schedule can be accessed at http://hispanicizeevent.com/schedule/ or via the smartphone apps of iTunes, Android. To purchase a pass to attend the event REGISTER HERE. To reserve a hotel room visit http://bit.ly/20wa0iM. See the official preview video of Hispanicize 2016 here: https://www.youtube.com/watch?v=Ys3_h5m8V6s.

In the spirit of its theme #PowerInUnity, this year’s event is being produced in collaboration with Geoscape, the National Association of Hispanic Journalists, the Latino Startup Alliance and Black Tech Week.

Sponsors to Date and Sponsorship Opportunities Available
Sponsorship information is available by contacting sponsorship@hispanicizeevent.com or calling 203.364.4779.