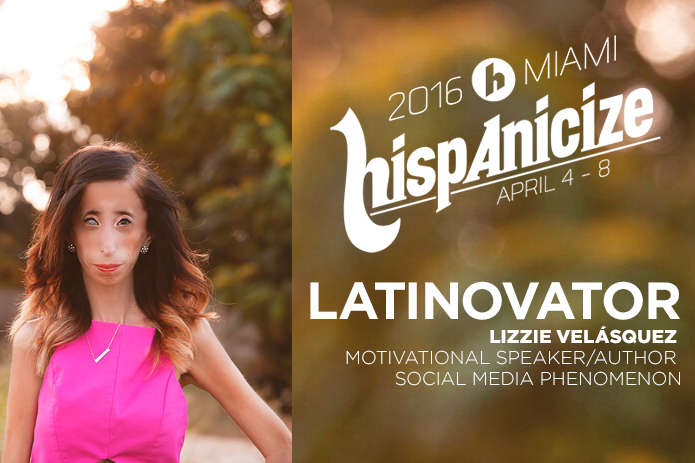 This afternoon Hispanicize Founder Manny Ruiz made one of many announcements to come regarding Hispanicize Event 2016. Ruiz took to Periscope to announce that the first Latinovator for this year’s event will be anti-bullying champion, motivational speaker and YouTube star Lizzie Velasquez, who shot to fame in 2013 with the most watched TEDx Talk from the #1 TEDWomen event across 58 countries. In addition to being named the first recipient of the Hispanicize 2016 Latinovator Award, Velasquez is also the subject of a documentary, A Brave Heart: The Lizzie Velasquez Story, which will be released in theaters across the U.S. by Cinedigm on September 25, 2015.

Through her motivational speeches and community work to combat bullying, Lizzie has become an international voice for millions and in front of the United States Congress where she is currently lobbying for the first federal anti-bullying bill: the Safe Schools Improvement Act (SSIA).
“Lizzie is one of the bravest and most remarkable high achievers/role models we’ve ever endowed with the Latinovator Award,” said Manny Ruiz, founder and creative director of the Hispanicize event. “At a time when Latinos are increasingly maligned in U.S. culture, we value Lizzie’s fascinating story about overcoming bullying. Her presence alone will unite and empower all Latinos at Hispanicize.”
LIZZIE’S COURAGEOUS STORY
Born in Austin, Texas, Lizzie grew up battling an unknown syndrome, which makes it difficult for her to gain weight. As a result, her body was subjected to other health challenges as well. At 5 ft. 2 in. and only 58 lbs., Lizzie is blind in her right eye and, throughout her life, has undergone eye surgery, ear surgery, complete foot reconstruction and bone density tests, among other procedures and examinations.
Recently, as shared in the documentary A Brave Heart: The Lizzie Velasquez Story, Lizzie was diagnosed with neonatal progeroid syndrome, which encompasses two main components – Marfan’s syndrome and lipodystrophy.
“I’m very thankful and very humbled to be honored by such an incredible community. I’m also very honored to be in such great company. My life’s goal is to help people realize that they are enough just being themselves. I hope I will be able to continue my work in hopes of helping as many people as I can,“ said Lizzie Velasquez.
At 17 years old, her life changed when she discovered a viral video on YouTube naming her the “The World’s Ugliest Woman.” This moment would serve as the catalyst for her becoming an anti-bully activist and motivational speaker.
Since then, she has done numerous speaking engagements around the world including Barcelona, Mexico City and Kuala Lampur and her TEDx talk, “How do YOU define yourself?” is one of the most watched TED talks of all time with more than 13 million views (combined English and Spanish versions). Additionally, her YouTube channel, where she shares her personal experiences and everyday improvement tips, has more than 400,000 subscribers.
This year, “A Brave Heart: The Lizzie Velasquez Story,” a documentary sharing her story and encouraging message, was screened at film festivals across the country. The film premiered and won the Audience Award at the 2015 SXSW Film Festival in addition to top honors at every festival it has participated in since then. Included among them are Michael Moore’s Traverse City Film Festival and Geena Davis’ inaugural Bentonville Film Festival, which was founded to champion women and diversity. The film’s production was funded via a Kickstarter campaign and became one of the site’s most successful crowd-funded documentary projects of all time.
The film will be released in top markets across the U.S. by Cinedigm on September 25 and available Digital HD and On Demand the same day. The film, directed and produced by Sara Hirsh Bordo and her Women Rising banner, is also available now for pre-order to individuals, educators, communities and organizations that want to host their own screenings in schools or theaters via Tugg.com.
Lizzie, a graduate of Texas State University is the author of three books: ‘Lizzie Beautiful: The Lizzie Velasquez Story,’ ‘Be Beautiful, Be You,’ and ‘Choosing Happiness’. Her story has been featured on Today Show, Katie Couric, The View, New York Times, USA Today, Wall Street Journal, Associated Press, Huffington Post, Los Angeles Times, USA Today and Yahoo! among many other national and international media.
About The Latinovator Award
Established in 2012, the Hispanicize Latinovator Awards strive to recognize Latino celebrities, business professionals and other high achievers who have become crossover successes or whose stories of achievements are remarkable or inspirational.
Lizzie Velasquez joins a prestigious roster of past Latinovator Award recipients that includes television icon Don Francisco, veteran actor Luis Guzman, actress and legend Rita Moreno, journalist Soledad O’Brien, iconic producer Emilio Estefan, news anchor Maria Elena Salinas, famed musician Sheila E., Cuban dissident blogger Yoani Sanchez, actor Carlos Ponce and others.
Altogether Hispanicize 2016 will name four recipients for 2016. Each of the innovators will be presented with their awards individually in person at Hispanicize 2016 as part of a special general session where they will talk about their inspirations, challenges, business habits and road to success.