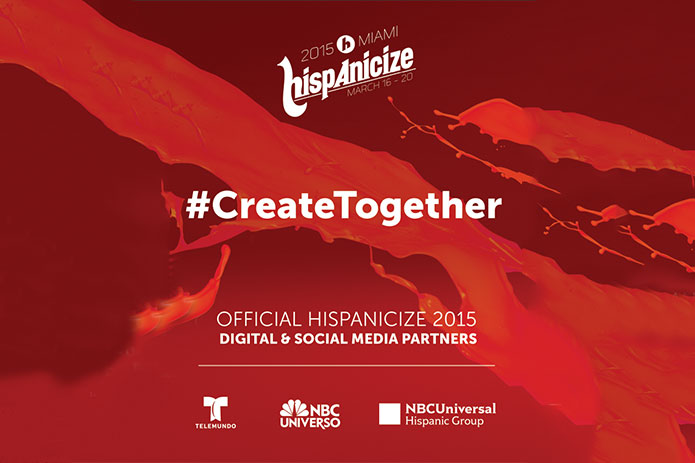 Telemundo and NBC UNIVERSO, engli divisions of NBCUniversal Hispanic Enterprises and Content, announced today a digital and social media partnership with this year’s Hispanicize conference (www.HispanicizeEvent.com) (#Hispz15) to take place at the Intercontinental Hotel in Miami on March 16–20th. As innovators in the digital space for US Hispanics, the networks will have a strong social media presence during the conference using a dedicated hashtag #CreateTogether and featuring an interactive content creation exhibit space on-site, as well as leading several panels including Hispanic Social TV, Hispanic Broadcast Television: What’s New and Under the Hood, Hispanic Social Media Industry Townhall and Mastering the Social Media Newsroom. The companies will also feature some of their most prominent and beloved talents, including Telemundo’s Maria Celeste Arraras (@MariaCeleste) (“Al Rojo Vivo”) duringFriday’s Uncap Your Happiness panel and NBC UNIVERSO’s Yarel Ramos (@Yarel_Ramos), who will host Tuesday’s Latinovator lunch with YouTube sensation Dulce Candy.

“Telemundo and NBC UNIVERSO are committed to bringing the most relevant and engaging content for our audience which is why partnering with Hispanicize to co-create with key Hispanic influencers is a perfect fit,“ said Borja Perez, SVP, Digital and Social Media, NBC Universal, Hispanic Enterprises and Content.

Telemundo, who is sponsoring the conference for the fourth consecutive year, will work closely with participating social media influencers at an interactive content creation hub on-site to take the conversation from the conference floor to the online community. The networks also will have a social media presence during the Positive Impact Awards and Tecla Awards where the network is featured as a finalist in two categories. To join the conversation at Hispanicize, follow us via Twitter @TLMDPR and use the hashtag #CreateTogether.

“Hispanicize is honored to have Telemundo and NBC UNIVERSO as sponsors and media partners,” said Manny Ruiz, founder and creative director for Hispanicize. “Their support underscores their commitment to the industries Hispanicize strives to serve in social media, marketing, journalism and entertainment.”

Now in its sixth year, Hispanicize 2015 gathers the biggest and brightest Latino influencers and newsmakers within the journalism, marketing, entertainment, brands and the blogosphere. Hispanicize 2015 is a partnership of the Hispanic Public Relations Association (HPRA), Hispanicize and the Public Relations Society of America (PRSA). The conference will be held at the Intercontinental Hotel in Miami during the week of March 16 – 20th.