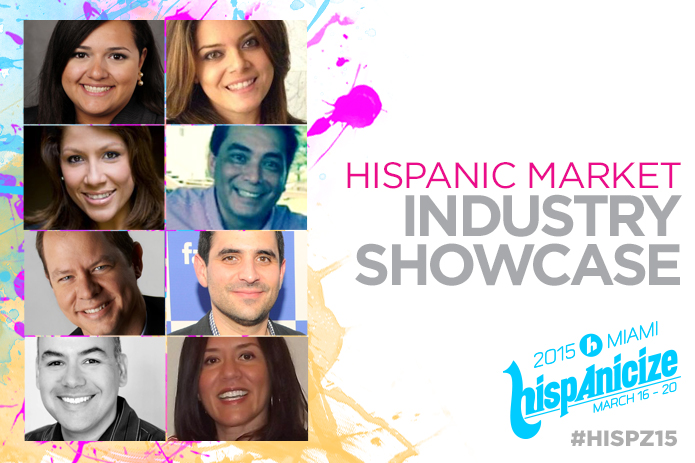 The blockbuster Hispanic marketing industry schedule features a Who’s Who of top Hispanic brand marketing executives who this year will also be joined by the largest contingency of leading Hispanic advertising, digital and PR agencies ever to assemble at Hispanicize.

“From research to digital, advertising creative to PR and broadcast TV, this year’s Hispanic Market Industry Showcase is our most comprehensive one yet and underscores why Hispanicize is the most essential Hispanic marketing industry event for marketers in the nation,” said Manny Ruiz, founder and creative director of the event. “In 2015 Hispanicize will once again bring brands and marketing alive through an immersive, interactive experience that is always fun and always substantive.”

One of the event’s biggest additions to Hispanicize this year is the launch of the Tecla Awards, a national awards program and red carpet gala that recognizes excellence in multicultural digital content creation and marketing. The Tecla Awards red carpet program will be held on the first day of Hispanicize 2015, March 16 at the JW Marriott Marquis and will feature a full musical performance by the Latin GRAMMY-winning duo Chino y Nacho.

(Purchase your all access pass to Hispanicize 2015 at http://www.hispanicizeevent.com/event-registration; Book your room now at: http://bit.ly/1v5hatt).

Altogether, Hispanicize 2015 features more than 60 sessions, 150 presenters, 4 film nights, a week of concerts and more than 2,000 attendees over the course of five days.

Paying tribute to its brands-focused Hispanic marketing and digital roots, the sixth anniversary of Hispanicize 2015 is bringing back its innovative series of 20 live streamed Hispanic Brand and Cultural Influencer Sit-downs. The studio-like setting will feature one-on-one, 10-minute long interviews with senior brand executives and trendsetters.

At least three major pieces of research will be unveiled at Hispanicize 2015. Connexión Research, the event’s official research partner in 2015, will host a special session discussing the results of an in-depth study about Latino Millennials while iBlog Magazine and the Latina Mom Bloggers network will unveil the findings of the second annual national survey of Latino Digital Infleuncers. California State University Fullerton, the National Association of Hispanic Journalists, Hispanicize Wire and Florida International University will also unveil the results of its 2nd annual study about the state of Hispanic journalists.

Facebook will conduct a major Hispanic Market update. For the fourth year in a row Google/YouTube will deliver their annual state of Hispanic market industry report session, a popular Hispanicize event tradition.

Below is a day-by-day breakdown of marketing, advertising, PR and social media related events and sessions at this year’s event.

– Super Power Your Linked In Profile with Lori Russ, The Linked In Diva (BY INVITE ONLY)

– Harnessing the Power of Facebook to Connect with Hispanic Audiences

– The Hispanic TV Networks: What’s New and Under the Hood for 2015

– Why Brands Should Use Responsive Technology in Latino Marketing Initiatives?

Sponsorship information is available by contacting sponsorship@hispanicizeevent.com or calling 203.364.4779. To reserve a hotel room visit http://bit.ly/1v5hatt.