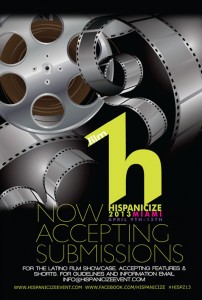 The Hispanicize 2013 Film Festival issued a national call for feature length and short film submissions today as part of a robust program expansion for 2013 that will spotlight more filmmakers and celebrities, and will include collaboration with other film festivals.  Hispanicize 2013 (http://www.hispanicizeevent.com), the fourth annual Latino trends event for filmmakers, bloggers, journalists, marketers and music artists, will take place April 9-13, 2013 at the Eden Roc Hotel in Miami Beach.

“Our commitment to film is expanding with a festival that is powerfully sharpened to showcase the works and talent of independent Latino filmmakers like never before,” said Manny Ruiz, founder and creative director of Hispanicize 2013.  “Everything we’re doing for 2013 is meant to empower filmmakers.”

To support these goals, the Hispanicize 2013 Film Festival has several new or enchanced changes for 2013 including:

Content focused on the business and marketing of Latino films:  Most film sessions in Hispanicize 2013 will focus on case studies related to the business, financing and marketing of films made by and/or for Latinos.  Additionally, there will be a Filmmaker’s Edition of the “15-minutes of Genius” sessions, which are a Ted-like talks featuring five back to back presentations packed with genius insights about a particular topic.

Latinovators and more stars: Expect a lot more star power in 2013. At least one of the recipients of the prestigious Latinovator award will be a major Latino influencer in film and entertainment. In the past, Hispanicize has highlighted Hollywood greats such as Oscar nominee Edward James Olmos, actors Andy García and Steven Bauer, among others.
Cult Classic Closing Night:  In 2012, Hispanicize featured a mega closing night program with the stars of “Scarface” at a private mansion in Miami Beach.  In 2013, the closing night cult film event will include a surprise movie that merges the themes of film, music and Latino culture in a powerful and fun way.

The Hispanicize 2013 Film Festival will award the following prizes:

Hispanicize Feature Film Jury Prize: $1,000 (This is in addition to a $500 maximum reimbursement for airfare and an additional $500 toward room and board for the winner).

Hispanicize Short Film Jury Prize: $500 (This is in addition to a $500 maximum reimbursement for airfare and an additional $500 toward room and board for the winner).

To submit your film visit http://www.hispanicizeevent.com/film/submit-your-film.html. Pay special attention to the “Description” fields. This information should be engaging and informative, as it will be used for Hispanicize marketing materials and program books.

The early submission deadline for feature and short films is January 21st. The late submission deadline is February 18th.  Films must be received by these dates; postmarks do not count toward the deadline. Refer to the FAQ with any questions. Films selected to be in the festival will be notified in late February.

All filmmakers whose works are chosen will be heavily publicized before, during and after the Hispanicize 2013 Film Festival. Additionally, each accepted feature length and short filmmaker will be provided with two badges for entrance into all Hispanicize events.  Complete film entry details are available at http://www.hispanicizeevent.com.

Latin Heat will play a lead role in the creation of workshops to help filmmakers develop content, network, market and fund their projects.

For its part, Getty Images Latin America will be instrumental in documenting Hispanicize 2013.

LATINA Style Magazine announces Top 50 best companies for Latinas to work for in the U.S.

Should creatives be unionized or earn