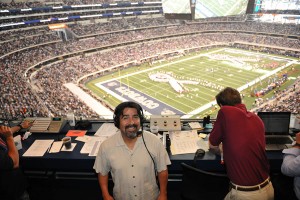 An interview with Victor Villalba, of the Dallas Cowboys

The timing was perfect this week for a conversation about NFL Hispanic marketing. With the NFL kicking off full festivities for Hispanic Heritage Month including community events, Hispanic Heritage Leadership awards, and even mariachis performing outside of stadiums, the relevance of Hispanics to the NFL was on the tip of everyone’s tongue.

On Tuesday, I had the opportunity to catch up with Victor Villalba, Manager of Spanish Language Broadcasting for the Dallas Cowboys. I approached Villalba, as it was obvious of his qualifications to discuss the team’s marketing and community outreach efforts towards Latinos having worked for the NFL team over 10 years, during two stints.

Villalba most recently returned to the Cowboys in 2002 to work with the Spanish radio broadcast. Soon after, Villalba was given the opportunity to do the Spanish language play by play which he does for every game, including this past Monday night’s game against the Washington Redskins.

I wanted to know what we all could learn from the most well known NFL team about marketing to Hispanics, community integration and the importance of knowing your customers. I have laid out my findings in the subsequent categories. Please review and add your comments and questions to the end, and also consider reading a similar article about the NBA’s Hispanic Marketing efforts.

2 thoughts on “Hispanic Marketing with ‘America’s Team’, the Dallas Cowboys”