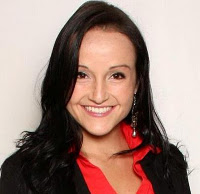 MillerCoors has named its 2011 Lider of the Year, Andrea Delgado, Senior Policy Analyst and Communications Manager for the Labor Council for Latin American Advancement (LCLAA). Andrea will receive a $25,000 grant for LCLAA to implement a Latino leadership project with MillerCoors.

The MillerCoors Lider of the year is chosen by public vote on www.MillerCoorsLideres.com. Andrea won 42 percent of the 25,464 votes cast. She was among twelve outstanding Latino leaders nominated by MillerCoors for their leadership and contributions to their communities.

“Andrea’s dedication to the Hispanic community and the environment serves as an example and an inspiration to all of us,” said Jose Ruano, multicultural relations manager for MillerCoors. “The competition among this year’s 12 Lideres was tough, as each is an incredible example of Latino leadership. We are proud to highlight the achievements of Latino leaders, like Andrea, so they may continue to be role models for future generations.”

Through her work with LCLAA, a national non-profit organization representing the interests of approximately 2 million Latino workers and their families, Andrea helps raise awareness about workers’ rights and environmental problems that impact Latinos in their workplaces and their communities. Through her work with the National Latino Coalition on Climate Change (NLCC), Andrea engages and educates minorities and elected officials about climate change and the importance of environmental protection to safeguard public health and create quality jobs.

“To know Andrea is to understand how passionate she is about addressing the issues that affect the Latino community, especially those related to achieving justice and dignity in the workplace and protecting the environment.  Andrea is an example that Latino youth hold a lot of promise for our workplaces, communities and the nation as a whole. We are fortunate to have her as part of our team,” said Hector E. Sanchez, Executive Director, LCLAA.

Since 2006, the MillerCoors Lideres program has raised awareness and highlighted the achievements of national and local leaders within the Hispanic community through an online public voting competition and a national advertising campaign. The program offers up-and-coming Latino professionals leadership tools and the opportunity to network through www.MillerCoorsLideres.com, www.Facebook.com/MillerCoorsLideres, and LinkedIn.