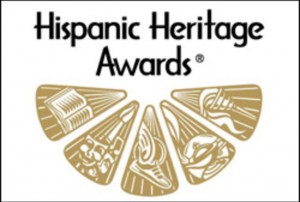 The 27th Annual Hispanic Heritage Awards will take place on September 18, 2014, at the Warner Theatre in Washington, DC.

“The Hispanic Heritage Foundation is proud to honor yet another inspiring group of Latino leaders with our prestigious Hispanic Heritage Award,” said Jose Antonio Tijerino, president and CEO of HHF. “The Hispanic community has made significant contributions throughout history, and we are proud to recognize that impact. Beyond celebrating our past success, we are focused on the future. Now more than ever, Latinos will play a vital role in moving America forward, and we applaud our sponsors, including Target as our presenting sponsor, for their leadership.  We are also thrilled to reach a broader audience through the partnership with PBS, who will broadcast the Awards.”

Top Latino performers and personalities will pay tribute to the Honorees from stage featuring a special performance to close program.

“PBS and our member stations represent and celebrate the communities we serve,” said Paula Kerger, President and CEO of PBS. “The Hispanic Heritage Awards are a great opportunity for us to pause and reflect on the contributions Latino Americans have made to our nation, and come together to recognize the fantastic honorees. We look forward to sharing this gala event with our audiences, both on our airwaves, and online, and hope that it inspires greater cultural understanding and appreciation of our diversity as Americans.”