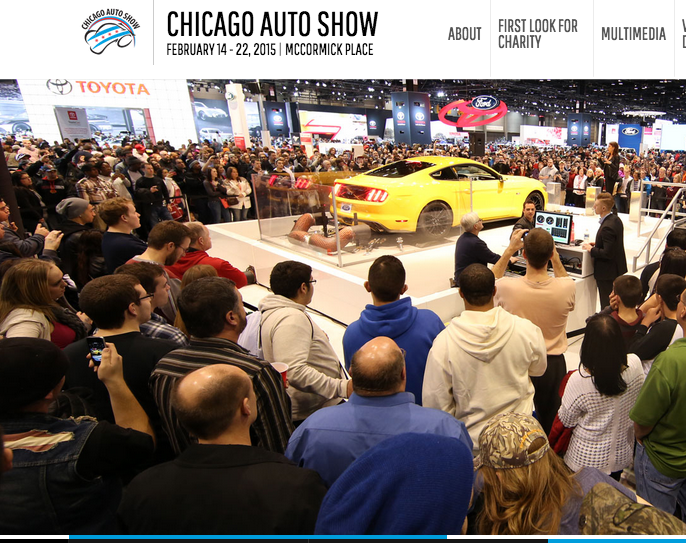 Taking center stage at the 2015 Chicago Auto Show will be a number of consumer vehicles making their world debut, including the all-new Acura MDX, Chevrolet Equinox, Honda Pilot and Toyota Avalon. Supercars are also on parade, catching the eye of Auto Show attendees.  As the biggest assemblage of supercars in the show’s history, a lineup of 25 cars will be showcased all across the showroom floor.

The show opens to the public on Saturday, Feb. 14. Opening weekend promises an exciting line-up of events and nearly 1,000 different vehicles that will be on display throughout the more than 1 million square feet throughout McCormick Place.  The show runs from Feb. 14-22 and is open from 9 a.m. until 10 p.m. each day, with the exception of the last day, where the show will close at 8 p.m.

“The Chicago Auto Show provides automakers the opportunity to connect with hundreds of thousands of consumers,” said John Webb, 2015 Chicago Auto Show chairman.  “In all, nearly a thousand different vehicles will be on display that appeal to each and every attendee; no other show can offer the diversity of display that you’ll find in Chicago.”

During the two-day media preview, more than a dozen new world introductions were made.  Chicago Auto Show attendees can be the first to see the newest cars debuted, including:

The supercars are back at the 2015 Chicago Auto Show in full force. The lineup includes:

Automakers displays will also host a number of notable new cars and trucks which are bound to attract the public’s eye, including:

General admission to the 2015 Chicago Auto Show is $12 for adults (ages 13-61), $6 for children (ages 7-12) and $6 for senior citizens (ages 62 and up).  Any child 6 years or younger may enter the show free of charge when accompanied by a paying adult.  Weekday discount tickets, which are $6 off general adult admission tickets, are available at area new-car dealers, participating Fifth Third bank locations and Shell gas stations.