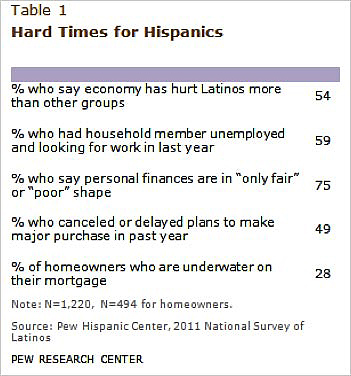 I feel compelled to continue exploring a topic I’ve been expressing in recent columns.

If we are to be effective in reaching a demographic for its potentially great resource as consumers, it is important to focus on other strategies besides just the tactics of how to be efficient. I believe that a deep understanding of not just the group trends as consumers, but also of the realities of its members as human beings, is the key to becoming an agent of change. Not that I want to predicate my political or sociological views here, but I think that by doing so, marketers could have the added benefit of tapping into the economic potential of the whole group through the way it perceives a brand’s efforts to communicate with it, thus creating loyalty.

So. In order to understand a culture, we must look at all its components, from idiosyncrasies to unpleasant realities.

Let’s continue reviewing a few of the unpleasant ones the Hispanic community faces first.

A recent Pew Hispanic Center article, “Hispanics Say They Have the Worst of a Bad Economy,” presents a bleak picture about the economic state of this demographic as one can quickly extract by looking at Table 1. Immigration, education and other factors also attempt against the healthy development of the largest minority of this country.

It is important to note however, that being aware of these conditions and statistics doesn’t mean that the future is hopeless. As we see later in the same study and in a subsequent one by the same authors, “Despite these downbeat assessments about their current economic circumstances, Latinos are more upbeat than others about the prospect for better days ahead—both for themselves and their families in the short term and for their children over the long haul.”

So. If the outlook by Latinos regarding their current economic and other circumstances is somewhat optimistic, the question then becomes one of what approach is more effective.

It takes a night of flipping channels between newscasts in networks that cater to American/general market viewers and the ones for Latino audiences to see some inconspicuous antonyms in the message delivered by advertising. While in mainstream networks a luxury car roaming sophisticated cityscapes may be an easy transition following the latest scandal surrounding an upscale madam, it has a totally different discourse when preceded by the story of a family torn apart by deportation and the possible economic implications of it. The ad may be in Spanish and even feature a Latino-looking driver behind the wheel, yet seem completely out of context.

This doesn’t mean that the viewers may not be inclined, or even in the position to buy a luxury car, or that adaptations of an original creative concept are impossible or that a completely different message must be presented to the audience.

In order to offer an effective link to the consumer, a message must coexist effortlessly within its environment. To use our planet with all its diversity as an example, this simply means that in order to live in any ecosystem, all things must learn the intimate workings of their habitat.

The Hispanic community is a habitat of sorts, an ecosystem with many intricate structures that combine to create a kind of group personality.

This brings me full circle to the first question I set out to find answers for when I began writing these columns: Is it important to have dedicated Hispanic advertising agencies?

Perhaps not when based on their original exclusionary model built on the scaffolding of language and cultural incompatibility. But there is an undeniable advantage to living in the land and being well versed in its geography.