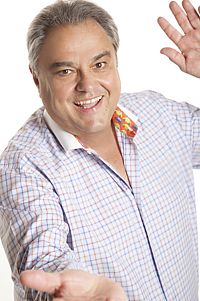 Hispanic celebrity chef and cultural icon Chef Pepin is this year’s spokesperson for Cargill’s second annual Rumba meats brand on-pack sweepstakes promotion – “Warmth of Home” or “Calor de Hogar” – which is timed around the holidays when specialty meat consumption is at its highest.

Pepin will personally share his recipes with consumers at in-store cooking demonstrations in select markets as well as make them available on the Rumba meats website.  Consumers will also have the opportunity to sample Pepin’s menudo recipe by attending Rumba meats food truck events in select markets.

The sweepstakes gives consumers a chance to win a $10,000 grand prize, one of 20 $500 prizes, or one of 80 free Rumba products.  Consumers can enter during the promotional period from October 17, 2011 through January 15, 2012 by texting, entering online at www.rumbameats.com, or visiting us on Facebook at www.facebook.com/rumbameats.

“The Rumba® meats team is thrilled to continue the holiday promotion not only for consumers but for our retail customers as well,” said Rumba meats Brand Manager Uzma Powell.  “The holiday season is typically a significant time for consumers to buy Rumba meats since they are commonly used in many traditional holiday meals.  We believe that adding Chef Pepin to the promotion will drive additional traffic to our customers’ stores.”