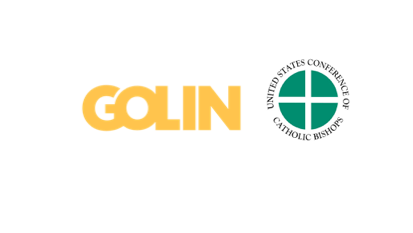 For America’s Catholics and the bishops who hosted Pope Francis during his first trip to the United States in September 2015, his visit was akin to the Super Bowl. But, it proved to be even bigger.

Beyond intricate logistics and the coordination of a vast media infrastructure, the United States Conference of Catholic Bishops (USCCB) had another goal: use the most cutting-edge 21st century social media tools and techniques to bring the pope’s message, developed over the first 20 centuries, to the people, in English and Spanish, like never before.

But the USCCB is not the NFL, nor does it have a similar social media infrastructure in place to deliver its message via the modern and fast-paced madness that is social media. There was no precedent, nor playbook to follow. It was a first for the USCCB and the Catholic Church.

The challenge was immense. How do you protect the most delicate of messages within the chaos of the social media landscape? That’s where Golin came in.

The plan to bring the mission to life:

The plan worked. We shattered records during a critical time for the Church – the first time it used social media to reach millions of people, both Catholics and non-Catholics, simultaneously in English and Spanish. The results were nothing short of breathtaking.

The Golin team knew we needed to better understand the issues surrounding the Catholic Church and the pope. And even more importantly, we needed to understand how all Catholics in America, including the ever-growing Hispanic Catholics, felt about them.

Given that millions of people were already talking about Pope Francis, we needed to cut through the clutter. Golin leveraged the Brand Voice process to develop a new social purpose for the USCCB: Joyously Move People to Merciful Action. This purpose was quickly adopted by the whole U.S. Catholic Church as a mantra for the visit and infused into all messages.

Guided by this purpose, we rebranded the USCCB’s social presence. Our team developed a total market content strategy highlighting the “Francis Effect,” inspiring the faithful to action through quotes and multimedia content in both English and Spanish.

Additionally, we updated the USCCB digital ecosystem and created new handles for the visit. Existing USCCB social channels (@USCCB and @USCCBespanol) housed all content, while new handles (@PopeInUS and @PapaEnUSA) curated the best, most relevant and inspiring content on Twitter and Instagram. The distinction between channels allowed each to be more focused and, in turn, valuable to their audiences.

In partnership with Twitter, Golin negotiated and secured a hashtag emoji around the official visit hashtags, #PopeInUS and #PapaEnUSA. The hashtag auto-populated an emoji of the pope in front of an American flag, one of the first dozen such emojis in Twitter history.

To prepare for His Holiness’ visit, the team relied on robust keywords to identify and focus conversations into actionable engagements and trends. In tandem, we developed reactive messages and tracked conversations around top influencers in English and Spanish.

We readied our rapid responders, nicknamed the Papal Army, from the Chicago Bridge during the final two days of Pope Francis’ visit. Their task: engage one-to-one, in English and Spanish, with the faithful following at home or attending one of the pope’s events in Philadelphia.

With two teams – one on location and another at the Chicago Bridge – Golin was ready to tackle a major moment in U.S. history with a multi-day, bilingual, real-time social activation across six social handles.  At 4 p.m. Eastern on Sept. 22, Pope Francis stepped foot on American soil for the first time. Here’s how we set out to reinvigorate U.S. Catholics with Pope Francis’ message:

We had a preview of the day’s activities and speeches from the Vatican Press Office, allowing us to select themes and pope quotes we knew would resonate with our audiences.

We identified key real-time moments: the Pope stepping off the plane, visiting Ground Zero, speaking with President Obama, greeting children and being introduced to Congress. In true real-time fashion, we seized unexpected moments, like when Pope Francis:

In minutes, the team turned those moments into something engaging and relevant, supplementing up to 10 pieces of pre-approved content developed in advance.

Our Bridge identified potential issues and noteworthy conversations. Each evening, we monitored for trends and developed a one-pager to brief the USCCB and Vatican on trends, themes and potential questions they’d receive during daily press conferences. When impactful news arose the team moved quickly to analyze, provide a point of view and develop proactive responses.

We deployed our Golin Chicago-based Papal Army when Pope Francis was at Philadelphia’s World Meeting of Families. On the USCCB Twitter handle, rapid responders engaged directly with thousands of people expressing admiration and love for the pope. Inspired by Pope Francis, we asked, “What do you pray for?”

When Pope Francis left for Rome, it was clear he made an impact on Americans. For weeks leading up to and during his visit, he was the most relevant figure in the country. Golin inserted the USCCB into the conversation in a meaningful way, expanding the halo of relevance to include the Catholic Bishops.

Our joyful messages reached our audience on a scale never been seen before by the Church*:

Post-visit, the Pew Research Center issued a survey and released results supporting the effectiveness of our efforts. Highlights: Created video content in real time by pulling the most important clips from the live feed of the Pope’s movements:

Shared compilations or other videos to help tell deeper parts of the visit’s story and encourage people to convert enthusiasm to merciful action:

Helped people share in the enthusiasm of the visit and ensure they know the Church is listening to them: