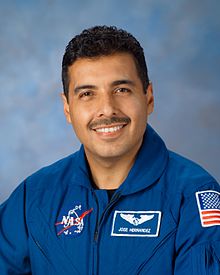 José Hernández, who rose from farm worker to astronaut and later ran for Congress, has a new mission. He’s promoting milk.

The Manteca resident has signed on as a spokesman for the Got Milk? campaign, which seeks to boost consumption of one of the Northern San Joaquin Valley’s top farm products.

Hernández is doing interviews in various media around the state on how milk can help children physically and academically.

“I do realize, having five kids and having been a kid myself, that milk is an important part of our diet,” he told The Modesto Bee.

Hernández was raised by migrant farmworker parents, living at times around Modesto, Tracy and Stockton. He became a NASA engineer and flew on the space shuttle in 2009. Three years later, he ran unsuccessfully as a Democrat against Rep. Jeff Denham, R-Turlock.

Hernández now works as an aerospace consultant and promotes mathematics and science education through his Reaching for the Stars Foundation.

The Got Milk? campaign, highly regarded by the advertising industry, was created in 1993 for the California Milk Processor Board, based in San Clemente.

Hernández is helping launch two new commercials. One features a girl in a supermarket imagining how milk could help make her an Olympic track and field star. The other shows milk fueling a firefighter who rescues a child from a burning building.