Flag-waving, USA American, Eagle Scout, Patriot Lou Dobbs resigns from CNN but will he be back?

In what is currently a story too good to be true Lou Dobbs has resigned from CNN effective immediately.  Dobbs, who is married to a Latina but has been bashing Hispanics for years, said he’s going on hiatus and will keep everyone informed of his next endeavors.  Here’s wishing that he gets relegated to satellite radio alongside Howard Stern.  Satellite radio would be the appropriate forum for Dobbs,  a man with a penchant for patriotically waving Old Glory on his former show’s set as he bashed Latinos and other people that don’t fit his definition of “American”. 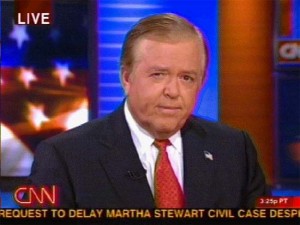 Dobbs’ resignation gives CNN, who just completed their ambitious “Latino in America” series, a clean slate to replace him with a conservative voice on the air that is not bent on bashing people from diverse backgrounds.  Conservatism is very good for our democracy and it has often been noble in many social policies but war-mongering, hate speech against minorities is not what conservatism can or should be.  This change is good for Dobbs, for CNN and for the Latino community in the United States.

In case you missed it here’s the story on Dobbs’ resignation.

NEW REPORT: The Rise of the Social Advertising