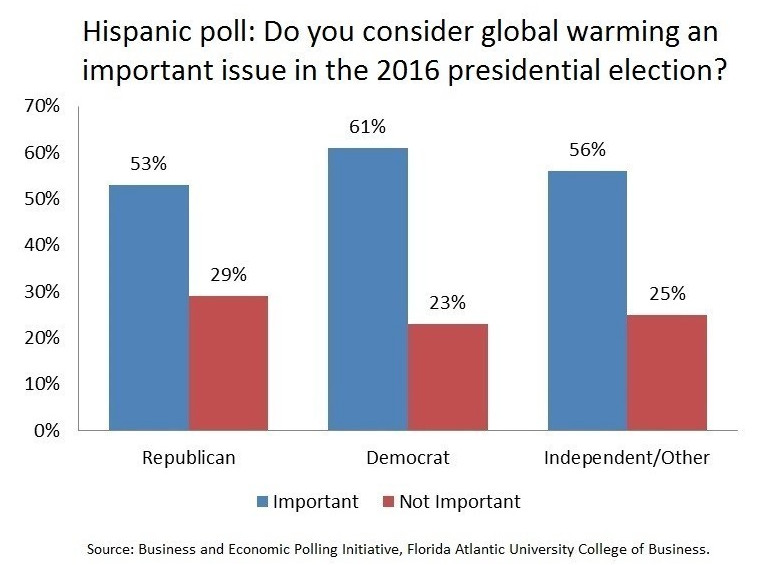 A majority of Hispanics believe that global warming is a serious problem and an important issue in the 2016 presidential election, according to the latest survey conducted by the Florida Atlantic University Business and Economics Polling Initiative (FAU BEPI) in the College of Business.

Nearly three out of five respondents (58 percent) consider global warming an important issue in the 2016 presidential election, including 60.9 percent of Democrats, 52.9 percent of Republicans, and 55.9 percent of those who identified themselves as independent or not registered.

“These results suggest that the issue is not as partisan with important sections of the electorate as one might guess looking at Congress,” said Colin Polsky, Ph.D., director of the Center for Environmental Studies at FAU.

Survey participants also were asked about Pope Francis’ encyclical, published in mid-June, on the effects of global warming on the poor and the need to protect the earth and its environment. When asked what, if any, impact they thought the Catholic Church could have on this issue, 60.9 percent of respondents said the church’s position can have a major impact.

The Consumer Sentiment Index among Hispanics bounced back from its lowest level of 2015 at 89.77 the previous month to 98.44 in June. The Current Economic Conditions jumped nearly 11 points from May to an all-time high of 103.49. The Index of Consumer Expectations recovered from a new low for the year in May of 87.74 to reach 95.19.

“A plausible explanation of the increase in all three indices might be the improving labor market,” said Monica Escaleras, Ph.D., director of the BEPI. “The unemployment rate among Hispanics decreased from 6.7 percent in May to 6.6 percent in June and is now down a full percentage point from a year ago.”