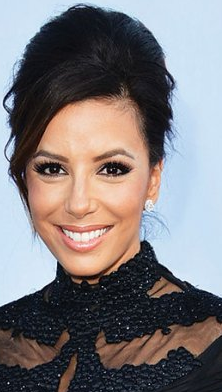 Recently, Eva Longoria spoke at a panel as a member of the National Association of Television Program Executives (N.A.T.P.E.) on “Sharpening the focus: How U.S. networks are engaging the Hispanic audience,” which was about the lack of Hispanics in television in general and, more specifically, about her own upcoming NBC comedy, Telenovela. While Ms. Longoria emphasized that the comedy would not be a Latin show, it does feature a telenovela star who doesn’t speak Spanish, and Eva adds that the main character is based primarily on herself. Longoria spoke to the panel addressing issues concerning the Hispanic community and the lack of representation in entertainment. Ms. Longoria feels that television tends to lose the Hispanic voice, even while the media has taken great strides toward diversity in entertainment.

While Eva and her production team have recently sold eight shows throughout the various networks, she worries that she may be viewed too narrowly, making her heritage a greater issue than the products she’s promoting, according to The Hollywood Reporter.

“I’m not the Hispanic go to producer. That’s not what I set out to do. A lot of the shows we develop happen to have interesting, diverse characters, a lot of female characters. And about half are organically Hispanic characters.”

In spite of her apparent successes, Eva Longoria continues to push for greater acceptance. While she does acknowledge that selling so many ethnically diverse shows has been a major accomplishment, Ms. Longoria also recognizes that the real hurdle is to get them through development and out to television viewers.

Eva’s Telenovela comes at a time when all networks are striving for more diversity in programming, and Ms. Longoria hopes the new show will provide a greater representation of Hispanics in entertainment. Telenovela will star Eva Longoria as Ana Maria, a leading actress on one of the Latin soap operas, who finds that there is as much drama behind the camera as there is in front of it.

To read the rest on The Hollywood Reporter, click here.