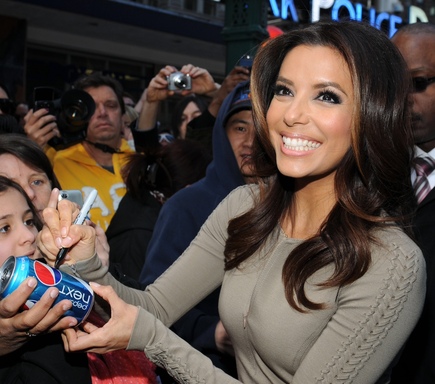 Today actress and star of the hit TV show Desperate Housewives Eva Longoria surprised lucky New Yorkers with a first taste of new Pepsi NEXT, the first cola to deliver real cola taste with 60% less sugar than Pepsi-Cola. To continue fueling the “Drink it to Believe it” excitement, actress and star of Mission Impossible: Ghost Protocol Paula Patton will bring Pepsi NEXT to Los Angeles fans on Monday, April 9th at The Grove at 1:30 PM PDT.

“I’ve been a member of the Pepsi family for years now so it’s a natural NEXT step to help launch new Pepsi NEXT,” said Eva Longoria. “I’m hoping to turn cola lovers in New York into believers!”

While consumers may be surprised and delighted by the famous faces serving up Pepsi NEXT, it’s the full cola flavor that will stay front and center, proving nothing overshadows great taste. “When it comes to Pepsi NEXT, tasting is believing,” said Angelique Krembs, Vice President TM Pepsi Marketing. “Whether it’s partnering with Eva and Paula to serve up free sips, sampling at local Walmart Supercenter stores across the country or inviting fans to “try” Pepsi NEXT online, it’s all about encouraging a first taste. We know that once cola lovers taste Pepsi NEXT, they’ll believe real cola flavor with 60% less sugar than Pepsi-Cola is possible.”

Consumers who aren’t in New York or Los Angeles can sample Pepsi NEXT for free either by visiting select Walmart Supercenter stores or checking out the sampling events happening in 40 cities from May – August. Visit www.facebook.com/pepsinext to learn more about Pepsi NEXT’s sampling efforts.

Can’t wait? “Try it” online with the Internet Taste Test, a unique experience on www.facebook.com/pepsinext that invites cola lovers to opt-in for a chance to watch themselves “taste” new Pepsi NEXT through the power and humor of improv.

The first cola to deliver real cola taste with 60% less sugar than Pepsi-Cola, Pepsi NEXT uses the perfect balance of ingredients and flavors to create a deliciously rich cola experience that gives consumers a reduced sugar option without sacrificing real cola taste. Come experience Pepsi NEXT by visiting facebook.com/pepsinext and share your “Drink it to Believe it” story on Twitter with @pepsinext.