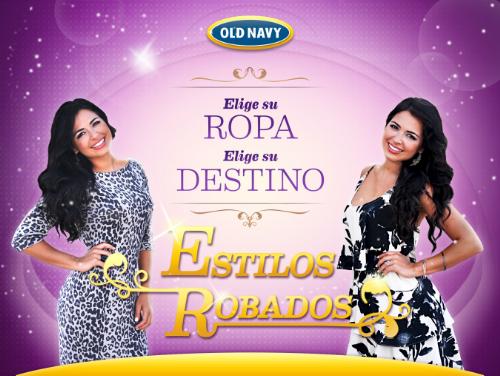 Old Navy and Telemundo have launched the first digital telenovela-style miniseries that engages consumers to directly impact the fate of the lead character. The Spanish-language web novela, ‘Estilos Robados,’  is a six part miniseries filled with comedy and satire plus the expected telenovela drama and plot twists that audiences love. ‘Estilos Robados’ launched last Friday, October 14 and will air on Fridays through November 18 on the ‘Estilos Robados’ tab within Old Navy’s Facebook page and on Old Navy’s Spanish YouTube channel, as well as on Telemundo Movil.

As a special interactive twist, the audience will “choose her outfit, choose her fate” at the conclusion of each episode by voting on a favorite Old Navy look for the main character, Isabella Reyes. As the story reaches its conclusion, the winning outfit will influence the finale, bringing to life the impact of style and fashion. Will our star dress for love, or for stardom?

‘Estilos Robados’ follows Isabella Reyes, one of TV’s hottest young telenovela stars. She has it all: beauty, fame, adoring fans and a boyfriend who is also a top novela star. She’s also an insufferable diva who has trouble keeping a personal assistant. As Isabella nears the end of production of her latest hit novela, she knows that she must land her next big role before fame slips through her fingers. On her quest to land the next big role, the audience will discover her secrets, surprise love interests and twists of fate that may lead to acts of revenge from people in her life.

To watch the episodes, vote and influence Isabella’s fate, visit facebook.com/oldnavy and click on the ‘Estilos Robados’ tab, www.estilosrobados.com, and http://m.telemundo.com/estilosrobados.