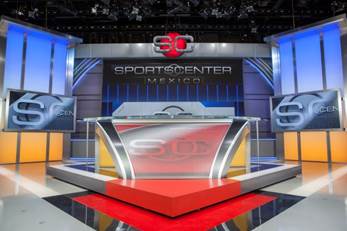 ESPN Deportes debuts its new four-studio production facility in Mexico City today, December 7, with the kick-off transmission of SportsCenter. The program airs at 11:30 p.m. ET following the Monday Night Football Dallas Cowboys vs. Washington Redskins game. Carolina Padron, Ciro Procuna and Jorge Eduardo Sanchez will anchor the show alongside special guests who to be announced on social media via #SCTeSorprendera.

“The SportsCenter produced in Mexico City embodies ESPN’s history of innovation and being an industry forerunner,” said Rodolfo Martinez, vice president of production for ESPN International and ESPN Deportes.  “At this new facility, we are able to seamlessly integrate the world-class production values and storytelling capabilities that the brand is renowned for around the world.  This achievement was made possible thanks to the collaboration and passion of our colleagues and our commitment to better serve fans around the world.”

Developed with the identical technology and look-and-feel of other SportsCenter editions, the studio is designed to enhance the presentation of content, increase engagement and provide a better stage for on-air journalists to showcase their knowledge and personality.

To help inaugurate the launch, the English-language U.S. SportsCenter will feature live coverage throughout the day from the Mexico City studios with Antonietta Collins, ESPN’s digital commentator and host of One Nación, and Mexico-based Sergio Deep and Ciro Procuna.  Other editorial integrations will include a segment on Monday Night Countdown focused on the Cowboys and their popularity in Mexico, and shots of the Mexico SportsCenter “in action” live on the U.S. SportsCenter after MNF.

The new SportsCenter on ESPN Deportes will continue airing three daily editions (7:30 p.m., 11 p.m. and 1 a.m) and two additional editions on weekends (1 pm, 4 pm), as well as coverage of major events. The Mexico City-produced SportsCenter airs in Mexico, Central America and in the U.S. on ESPN Deportes.