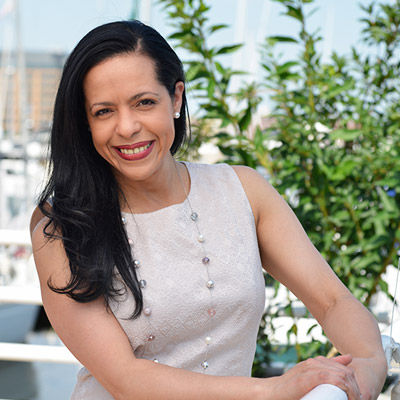 The Women’s Media Awards recognizes individuals who have made outstanding contributions to advancing women’s and girls’ visibility and power in media. Past winners include Lindy West, Luvvie Ajayi and Sady Doyle.

Ramos, known online as @ERGeekGoddess, is the principal and CEO of Speak Hispanic Communications and founder of the Border Kids Relief Project. Her specialty is the production of online/offline advocacy campaigns that connect political leaders, community advocates and Latino influencers.

“In my culture, women like me don’t make it in the media,” Ramos said at the event. “I’m not tall enough or pretty enough or curvaceous enough. My hair is not straight enough and my skin not light enough. “

“So where can a woman like me turn? What does she do? I’ll tell you what she does: She takes to Twitter, and Facebook, and YouTube, and she makes her own media,” Ramos said. “For my community, for my own daughter. This is my passion work. This what makes me stay up all night and jump out of bed every morning. This is my soul speaking.”

Ramos moderates highly rated Google Plus on-air broadcasts on such topics as climate change, education, voter registration, human trafficking, and using social media for social change. She hosts Twitter chats with up to 20 million impressions. Her commentary and interviews have been featured on USA Today, ABC/Univision, CNN, Fusion, NBC Latino, Fox Business News, Voice of America, and many others. Ramos is also the founder of the Border Kids Relief Project, a partnership among organizations offering assistance to refugee children transitioning into immigration proceedings, combined with an extensive social media outreach campaign to build awareness of the issue, and the need for volunteers and donations.

“Elianne is the winner of our ‘People’s Choice Award’ and was chosen by votes cast on the Women’s Media Center website,” says Julie Burton, President of the Women’s Media Center. “The Social Media Award honors the work of those who have been previously silenced or ignored in traditional media, but have forged their own path to reaching wide audiences and affecting many lives. Elianne’s passion to change the media perceptions of Latina women and to create platforms for communities to inform, engage and empower women is why she deserves this honor.”