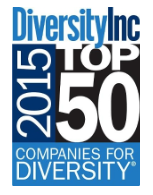 DiversityInc announced the 2015 Top 50 Companies for Diversity in front of more than 900 senior executives. Novartis Pharmaceuticals Corporation remained at the top of the rankings for their second year, while Kaiser Permanente jumped two spots to come in second. PricewaterhouseCoopers, EY, Sodexo, MasterCard Worldwide, AT&T, Prudential Financial, Johnson & Johnson, and Procter & Gamble rounded out the top 10. MassMutual Financial Group and Hilton Worldwide were both newcomers to the list this year.

“With more than 1000 companies participating, the competition for a spot on the DiversityInc Top 50 and Specialty Lists was up over 30% this year,” said DiversityInc Founder and CEO Luke Visconti. “Companies are recognizing the importance of diversity for corporate reputation – which directly effects millennial-generation recruiting and retention. And whether you’re talking about Silicon Valley, Ferguson, or Indiana, there’s no denying that stories about how far we still need to come regarding diversity have been dominating the headlines in 2015.”

DiversityInc Top 50 companies have significantly more diversity than average American corporations. Compared with EEOC statistics, Top 50 companies have 20% more Blacks, Latinos, and Asians in management, and 13% more women. In the Top 10 the contrast is even sharper, with 41% more Blacks, Latinos, and Asians, and 46% more women than US corporate average. This year, for the first time, the National Organization on Disability tracker was required for the Top 10 Disabilities list.

CNBC covered the DiversityInc Top 50 event and provided the stock market econometric evaluation. “The Top 50 list outperformed the market on a short and long-term basis – which has been the case over the past several years. This shows evidence of the link between excellence in diversity management and superior corporate governance,” said Visconti.

Any company with over one thousand U.S.-based employees is eligible to enter, and there is no cost to compete. Each company’s rank is based on objective analysis of 183 separate factors, based on data from a 300-question survey. The four equally weighted areas of measurement include Talent Pipeline, Equitable Talent Development, CEO/Leadership Commitment, and Supplier Diversity.

“We are extremely honored to be recognized by DiversityInc as the top ranked company for a second year in a row,” said Christi Shaw, President, Novartis Pharmaceuticals Corporation and US Country Head, Novartis Corporation. “For us, Diversity & Inclusion are an important part of our culture and strategic business focus. Fostering an environment where authenticity and collaboration can flourish enables us to drive future breakthroughs and innovations that help patients live fuller, healthier lives.”

The announcement dinner included a keynote address from Reverend Jesse Jackson, Sr., whose Rainbow PUSH Coalition has been calling on the tech industry to embrace more diversity as a business opportunity.