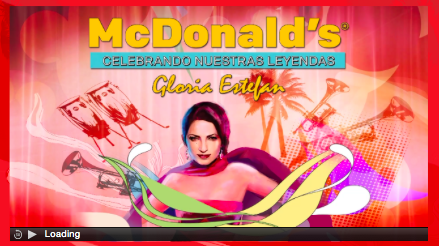 The multichannel program created by d expósito & Partners, celebrates Hispanic Heritage Month with iconic figures and has garnered  national and international media coverage for the chain. It includes in-store materials designed to engage consumers with a trivia component.

Previous icons include singers Celia Cruz and Juan Luis Guerra, and baseball player Mariano Rivera. This year Gloria Estefan has been chosen as the iconic figure to be honored during Hispanic Heritage Month ( September 15 – October 15).

The program highlights Estefan’s legendary achievements and via a QR code leads consumers to an exclusive video-tribute honoring Gloria.

Audiences are encourage to visit the website http://www.mcdonaldsnytristate.com/gloria_estefan/ and take part in various activities including voting for their favorite of two original illustrations: one of Gloria at the beginning of her career and the other featuring the legendary Gloria of today. McDonald’s “Celebrando Nuestras Leyendas” is funded by New York/New Jersey/Connecticut franchisees. In addition, the program recognizes its Hispanic consumers and employees while honoring iconic figures and contributing to their charity of choice.

Since its inception, the program has had groundbreaking results. It was awarded “#1 Ethnic Program” by McDonald’s National in its inaugural year, it has boosted restaurant visits and website traffic while garnering more than 1 billion impressions.