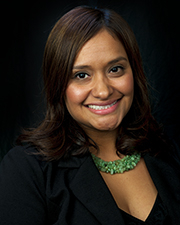 Vega’s passion for community and public affairs first developed during her service as an intern and staff assistant to former Assembly Member Sarah Reyes. She continued her service to the public working as an intern for U.S. Senator Dianne Feinstein, district representative for Congressman Jim Costa, and board assistant for Fresno County Supervisor Phil Larson.

Vega previously served on the Board of Directors for the Central California Hispanic Chamber of Commerce, Fresno’s Leading Young Professionals, Central California Latina Network and the advisory council for the U.C. Merced Small Business Development Center (SBDC) Regional Network. She is also an alumna of the Hispanas Organized for Political Equality (HOPE) Leadership Institute Class of 2008.

Vega is a graduate of California State University, Fresno where she earned a degree in Mass Communication & Journalism and Chicano Latino Studies. As a student, Angela was awarded the Bernard Shephard Journalism Scholarship for Public Relations and the Costa Federal Intern Scholarship through the Maddy Institute.