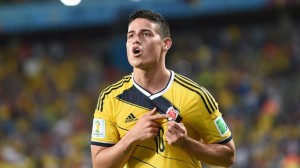 Rodríguez, whose name became a household word during the 2014 FIFA World Cup this summer, was recruited by Spain to play for Real Madrid this year. (FIFA, www.fifa.com)

Freddy Upegui, a Colombian moving truck driver in Spain who’s been out of work for two years, is scraping together funds so that he can buy a Real Madrid soccer shirt with the name of his idol James Rodriguez on the back.

“As soon as I have the money I’m going to buy that shirt and try to see him play,” said Medellin-born Upegui, 39, who has been in Madrid for 17 years and now makes money selling snacks such as Colombian-style fried cheese balls called “buñuelos.” “He’s showing that Colombians can make their way in the world and become the very best at anything.”

Rodríguez, who could make his Spanish league debut tonight in Real Madrid’s home match against Córdoba, is a symbol of a newly confident Colombia that reached its first World Cup quarter finals while its economy is the fastest-growing in Latin America, said Fernando Carrillo, the country’s ambassador in Madrid. The soccer success contrasts with the challenges still facing Colombians and other immigrants in Spain as the country emerges from a six-year economic slump.

“There are people that bet everything on coming to Spain and then end up at the consulate in Spain asking for a ticket home to Colombia because they can’t last another day here,” said Nino Gaviria, projects director at America Spain Solidarity and Cooperation, a Madrid-based association supporting immigrant communities. “A lot of people have gone home.”