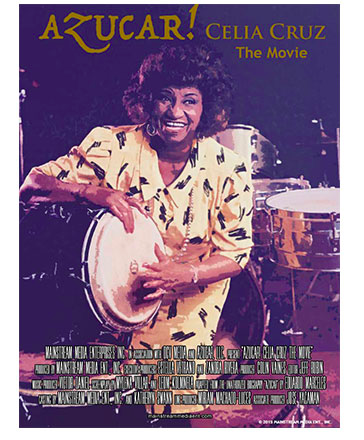 The Chicago-based, global marketing and production company, MainStream Media Ent., Inc. has partnered with DCV Media, Miami FL. to produce the inspirational film about the life and legend of Celia Cruz, the Queen of Salsa. DCV Media obtained the global rights to the unauthorized biography and has partnered with MainStream Media Ent., Inc. to do the feature film.

“Our cast wish list: Zoe Saldana to play Celia Cruz as well as, John Leguizamo, Antonio Banderas, Marc Anthony, Tito Puente Jr., among others and to direct, Guillermo Arriaga” said CEO and Founder, Zandra Rivera. Although the company has gained recognition for creating independent films and television, this will be the company’s first major feature film. Ms. Rivera, however, has a long history of working with top-billed talent.

MainStream Media Ent., Inc. specializes in integrating cultural content into digital experiences for one of the most powerful U.S. consumer demographic: American Latinos. MainStream Media Ent., Inc.’s partnership with DCV Media’s CEO, Estella Vetrano, grew out of the aligned vision created by both ladies. Combining their love for the singer and the mission to celebrate the American Latino culture, the film is the perfect combination.

“Several years in the making, the unauthorized biography of Celia Cruz gave me the opportunity to get to know a wonderful woman who, through her talent and charisma, was able to conquer the heart and ears of million of fans around the world,“ says author Eduardo Marceles who published the book in 2003.

Both Ms. Rivera and Ms. Vetrano had the fortunate pleasure of meeting the late Ms. Cruz. The producers’ intent is to remain faithful to her truth. The film will contain original footage from Celia’s life.

“I am so honored to be working with a group of women with same level of passion that I have to tell the story of a poor black woman who even when facing incredible odds and obstacles went on to become the most recognized voice in salsa music, the queen of salsa Celia Cruz. To see this project come to fruition has and will be a life-long dream of mine,” says Ms. Vetrano of DCV Media.

“I’m inspired to provide opportunities for our American Latino talent, in front and behind the camera. My mission is to help individuals who may not have the same opportunities,” Rivera says.

Zandra Rivera has experienced many challenges along the way and feels very close to Celia Cruz. “It is a blessing, an absolute privilege and an honor to be a part of such an important historical artifact. I only hope we can do justice to the bigger-than-life beauty, love and personality that was Celia!”

MainStream Media Ent., Inc. utilizes its strong global network to focus on three key areas: Entertainment, Corporate, and Education. “We are 35 years of combined expertise in these target areas,” stated Rivera. “I’m proud of the tremendous moves we’ve made with MainStream Media Ent., Inc. in creating and paving the way for a new type of programming focused on inspiring American Latinos in the U.S. and all over Latin America. It is a huge responsibility and I feel honored to be one of the pioneers in American Latino programming!” says Ms. Rivera. This feature film, “¡Azucar!” is one of three major projects for 2016.