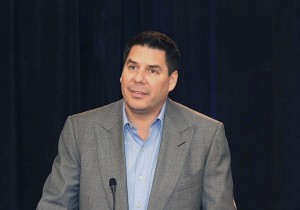 New Sprint CEO Marcelo Claure stepped into his new job running the wireless carrier in the country this week.

The Bolivian immigrant who started with a small cell phone retail business went on to build the telecommunications company Brightstar, which saw sales of $6.3 billion last year, according to Forbes, and was valued at about $2.2 billion. He sold the business just before being tapped by its buyer, SoftBank, to head Sprint.

Claure has been a member of the U.S. Hispanic Chamber of Commerce for years. His hiring at Sprint to shore up the carrier’s position behind AT&T and Verizon has implications for Latinos and Latino-owned businesses, said Javier Palomarez, the chamber’s president and CEO, who sat down with NBC News Latino to discuss Claure’s hiring.

“He is the consummate outsider as it relates to what you see out there in terms of CEOs in the space,” Palomarez said.

“Marcelo’s going to bring a sense of energy and a real, I think, sense of urgency to the Sprint organization,” Palomarez said. “He also walks in the door already, literally in his DNA, but certainly in his way of thinking, much more international in scope.”

The two have been friends through the chamber and in 2009 the USHCC gave Claure its Hispanic Businessman of the Year Award in 2011.

Claure’s Brightstar $10.2 billion company has a presence in 125 countries, with a good part of his business built on selling equipment in Latin America, Palomarez said.

Palomarez is a former Sprint employee in marketing and sales. The company is a funder of the chamber, but so are AT&T and Verizon, at much higher levels, Palomarez said.