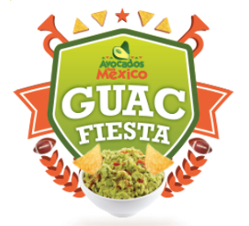 Beginning Jan. 1 Avocados from Mexico will huddle up with 1,000 Hispanic stores in key regions for Guac Fiesta, a retail promotion offering a $3,500 prize package to five winners.

The campaign is designed to increase consumption through football season among bicultural Hispanics in California, Arizona, Texas, Chicago, Miami and New York City, according to a news release.

“Guac Fiesta is a great way to reach the bicultural Hispanic who loves American football,” Stephanie Bazan, Hispanic marketing director for Avocados from Mexico said in the news release.

Interest in NFL and college football among Hispanics increased from 2010 to 2014, according to Experian Simmons data cited in the release. Other data shows the majority of Hispanics who watch the NFL are bicultural and English speakers, according to the release.

The Guac Fiesta campaign includes a text-to-win contest where consumers have a chance to win a big screen TV for football viewing parties.