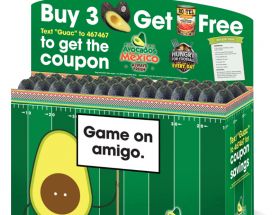 Avocados from Mexico has revealed that it has extended its Guac Fiesta campaign to reach the Hispanic trade in key markets.

The program is designed to drive consumption of Avocados From Mexico through aggressive retail promotions in key Hispanic markets during the height of the NFL season and through to the Super Bowl.

The program will feature a mobile sweepstakes and an AFM coupon offer that also gives shoppers a fun new recipe to try. Additionally, the campaign will include digital and social media, merchandising, and trade and consumer public relations efforts.

“Guac Fiesta is a great way to reach the bicultural Hispanic who loves American football,” said Stephanie Bazan, AFM’s Hispanic marketing director. “Last year was the first year the Big Game was broadcast in Spanish and the sport is a great way to engage Hispanics during the top US occasion in which guacamole is consumed.

“American Football season is a fun time when families and friends come together to experience the game and that is no different for the Hispanic fan base,” she added. “Adding avocados to a favorite dish is a great way to add some flavor to the fiesta.”