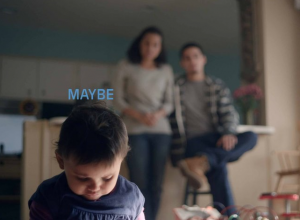 An ad in the campaign showing parents observing a child with the early warning signs of autism, a developmental disorder. ( New York Times)

The campaign, developed with the Advertising Council, which has worked with Autism Speaks since 2005, was created by the New York office of BBDO and LatinWorks of Austin, Tex., both part of the Omnicom Group. The campaign describes early signs of autism in detail and encourages parents to take immediate action if their child does not meet standard developmental milestones.

The new campaign is geared specifically at Hispanic and African-American parents because, according to the Centers for Disease Control and Prevention, the current age of diagnosis among these groups, as well as among low-income families, is higher than that of the general public. According to the C.D.C., although the average age now of diagnosis in the United States is 4 to 5 years, a reliable diagnosis can be made as early as 18 to 24 months. And if the disorder is treated from the ages of 3 to 5, from 20 percent to 50 percent of children with autism will be able to attend mainstream kindergarten, according to studies by The Journal of Consulting and Clinical Psychology and The Journal of Autism and Developmental Disorders.

Autism is the fastest-growing serious developmental disorder in the United States. According to a study released last year by the C.D.C., in 2008, one in 88 children was diagnosed with autism by a doctor or other medical professional, a 78 percent increase over 2002. For boys, the ratio was one in 54.

Dr. Geraldine Dawson, chief science officer of Autism Speaks, said the increase in autism diagnoses was partly because of a broadening of the definition of the disorder. She also said environmental risk factors probably affected the increase.

Autism Speaks, founded in 2005 by Bob Wright, former chairman of NBCUniversal, and his wife, Suzanne, whose grandson has autism, took a different tack than before with the new Ad Council campaign. Messages of previous campaigns, also created by BBDO, focused on the numerical odds of children being found to have autism, some with celebrities whose children have autism.

Online Community Killers to Avoid at All Costs