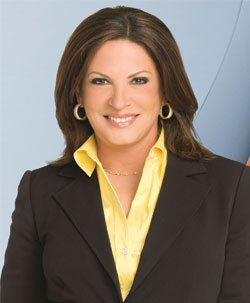 Award To Be Presented At The 25th Annual NAMIC Conference Scheduled October 4-5, 2011 in New York City As Part Of Diversity Week Presented annually in conjunction with the NAMIC Conference, the Mickey Leland Humanitarian Achievement Award was established in 1992 in memory of the late Congressman from Texas for his lifelong advocacy of social justice and equality for people around the world.  The 25th Annual NAMIC Conference is scheduled for October 4-5, 2011 at the Hilton New York in Manhattan as part of Diversity Week.   Polo will be honored at The Mickey Leland Humanitarian Achievement Award Luncheon, which takes place Wednesday, October 5th from 11:45 a.m. to 1:00 p.m. at the Hilton New York’s Grand Ballroom.

Since the inception of the Mickey Leland Humanitarian Achievement Award, NAMIC has continued its tradition of honoring individuals and organizations affiliated with the communications industry that demonstrate a commitment to advancing the concerns of people of color.  A breast cancer survivor, Polo serves as a role model for women, while working with various organizations with the common goal of finding a cure for the disease.  Additionally, Polo is a proponent of human rights, committed to fighting against discrimination.

Maintaining a connection with the nation’s Hispanic community for the past 10 years, Polo is recognized as one of Hispanic Television’s most prestigious personalities within the United States and abroad.  With more than 20 years of experience as a lawyer, Polo began hosting Telemundo’s program “Sala de Parejas” (Couples’ Room) in 2001.  “Sala de Parejas” was relaunched as “Caso Cerrado con la Dra. Ana Maria Polo” (Case Closed with Dr. Ana Maria Polo) in 2005.  Highlighting lawsuits and legal situations, the original series holds the distinction of being the first Spanish-language program nominated for a Daytime Entertainment Emmy Award.  In 2010, based on the success of “Caso Cerrado,” Polo’s on-air hosting role was expanded to include “Caso Cerrado Edicion Estelar” (Case Closed Primetime Edition) and “Persiguiendo Injusticias” (Pursuing Injustices).  An accomplished author, Polo’s first book, “Querida Dra. Polo Las cartas secretas de Caso Cerrado” (Dear Dr. Polo: The Secret Letters of Cased Closed) has sold out its first edition since being released November 2, 2010.