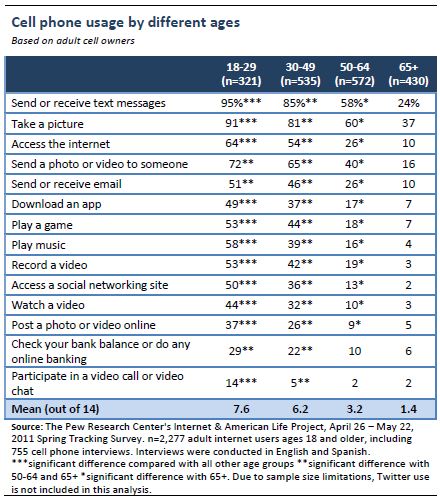 Eight in ten American adults (83%) own a cell phone of some kind, and they use their phones for a variety of purposes. As in previous Pew Internet surveys of mobile usage, texting and picture-taking remain the most common mobile phone activities—73% of cell owners engage in each of these—followed by sending photos or videos to others (54%) and accessing the internet (44%). The two least prevalent activities (among the 15 we inquired about) are accessing Twitter and using one’s phone to take part in a video call or chat (6% of cell owners do each of these).

Of the twelve activities that we measured in both May 2010 and May 2011 (we did not ask about online banking, Twitter use or video calling in our spring 2010 survey), five grew by a statistically significant amount over that time period. This growth was primarily oriented around accessing or sharing multimedia content such as photos or videos, as well as using the internet and email:

Younger cell owners (those between the ages of 18 and 29) are especially active mobile users—although those ages 30-49 engage in a relatively wide range of mobile behaviors as well. Mobile usage drops off starting around age 50, as cell owners ages 50-64 engage in roughly half as many activities as those in the 30-49 age group.

Other groups with relatively high levels of mobile usage include: