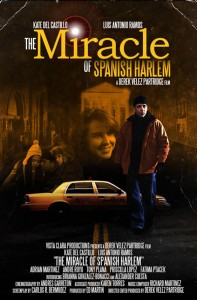 The motion picture A Miracle In Spanish Harlem has received a PG rating by the Motion Picture Association of America and will be released in more than 100 theatres nationwide on December 6, 2013, it was announced today by DigiNext, a joint distribution venture between Digiplex Destinations (NASDAQ CM: DCIN) and Nehst Media Enterprises.  Screenvision is a distribution and promotional partner in the film’s release.

The family-friendly story about love, faith and redemption stars Kate del Castillo in her first mainstream English speaking cinematic lead as Eva O’Riley. Beautiful and alone, Eva feels a spark of romantic interest when she meets Tito (Luis Antonio Ramos), a young widower struggling with the loss of his wife, his hope and his faith.

The pressures of trying to keep a failing business above water and caring for his two young daughters, Amanda (Fatima Ptacek) and Samantha (Brianna Gonzalez-Bonacci), blind Tito to the devotion of his family and friends. Nothing short of a miracle can relieve Tito’s solitary burdens. However, miracles have been known to happen.

In A Miracle in Spanish Harlem, director and producer Derek Velez Partridge presents a tender story with a Latin flavor that deals with themes that are universal. It will engage audiences with laughter, tears and circumstances of human relationships that everyone can relate to. The MPAA has included the following descriptive information as guidance for movie-goers “thematic elements, brief mild language and some disturbing images.”

How Moms Use Smartphones for Health Info